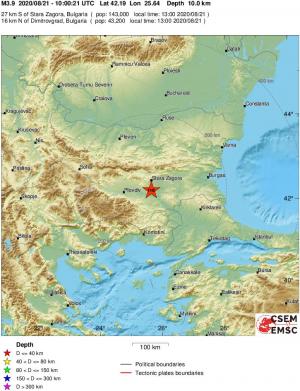 A 5.1-magnitude earthquake shook Bulgaria’s Stara Zagora early afternoon on Friday, 21 August 2020, at about 1 pm Local time on 21 August 2020, leaving aftershocks in a region that has been rattled by clusters of earthquakes and tremors.

There were no immediate reports of casualties or widespread damage from the earthquake, which was 10 km deep in soil and epicenter located at Stara Zagora, Dimitrovgrad, Bulgaria  region the European-Mediterranean Seismological Centre  said.

An earthquake friday struck less than a mile from Stara Zagora, Dimitrovgrad.