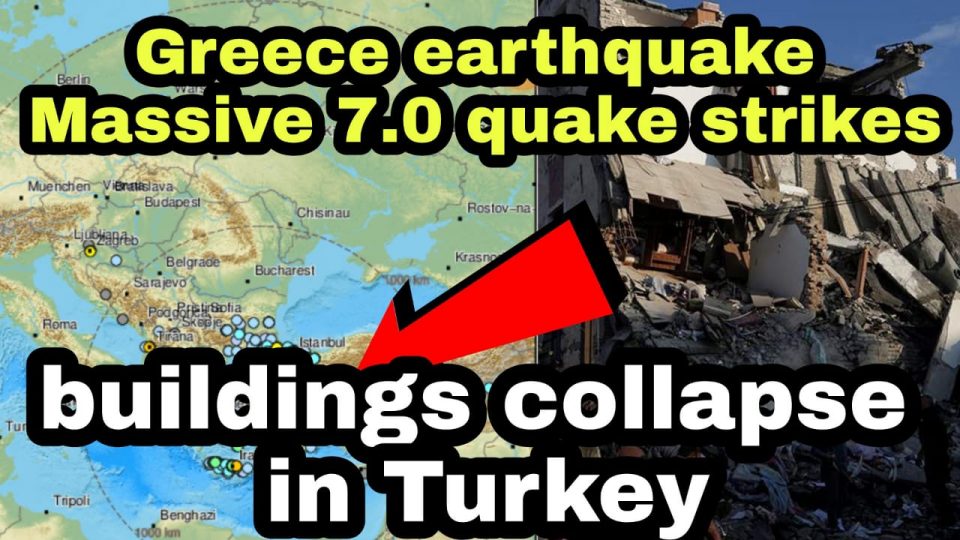 An huge earthquake of magnitude 7.1 rattle Turkey’s Aegean coast on Friday according to AFAD  data.

According to data the epicenter of this quake was found at around 11 miles off the coast of the IZmir province at a depth of 16 km,AFAD said.This earthquake felt at a large area including Turkey’s Aegean coast and the northwestern Marmara region as per media report.

A large number of buildings were collapsed due to this quake.As per Turkey’s mayor Aegean  port city of Izmir felt badly.Many trajedic scenes were reported.

The video on twitter shows this hazardous quake hit Turkey how badly.The othority are trying to rescuing people.

People flooded to the streets in the Turkish coastal city of Izmir after the earthquake, news agency reported .Footage from Turkish state broadcaster TRT Haber showed a collapsed building in central Izmir.

The US Geological Survey said the depth was 10 km and that the epicentre was 33.5 km off Turkey`s coast.

Residents of Samos, an island with a population of about 45,000, were urged to stay away from coastal areas, Eftyhmios Lekkas, head of Greece`s organisation for anti-seismic planning, told Greece`s Skai TV. “It was a very big earthquake, it`s difficult to have a bigger one,” said Lekkas. Ali Yerlikaya, the governor of Istanbul, where the quake was also felt, said there were no negative reports.

Turkish media showed wreckage of a multiple-story building in central Izmir, with people climbing it to reach rescuers. Smoke was seen in several spots in the city.

Images on social media showed water rushing through the streets of Izmir from an apparent sea surge.

Another tsunami footage from the earthquake in Izmir province of Turkey.

This one is really dangerous pic.twitter.com/62zfddWSi8

Having read this I believed it was very informative. I appreciate you finding the time and effort to put this informative article together. I once again find myself personally spending a lot of time both reading and leaving comments. But so what, it was still worth it!| Clarey Brian Mellar

well, earning money is a bit tricky and hard sometimes. you really got to be very creative if you want to earn more:: Bobinette Rudiger Callie

Is it a win for comic books fans? Because all the comic readers I know have given up on these films. Coralyn Gardiner Heida

certainly like your web site but you need to test the spelling on several of your posts. A number of them are rife with spelling problems and I to find it very bothersome to inform the truth nevertheless I will surely come back again. Thalia Ilario Jonny

Wow, fantastic blog layout! How long have you been blogging for? you make blogging look easy. The overall look of your web site is fantastic, let alone the content! Kala Isacco Harald